On the outskirts of the Snåsa village, in a secluded pristine forest, the Snåsa water source flows safely underground. Our groundwater source, approved by the Norwegian Food Safety Agency in 2013, has a sustainable yearly capacity of nearly one billion liters of Natural Mineral Water. The source keeps a constant temperature of 3.5 °C all year round. The crystal clear and tasty water has super low mineral content and is perfectly suited for all.

It’s such a simple, prosaic moment. Mohamed Sambou stands by the window in the kitchen of his wife’s grandmother, and looks out at the wild landscape surrounding the small village of Snåsa. In his hand he is holding a glass of water. He drinks a sip. Looks at the landscape. Drinks one more sip. The cool, fresh water. Nature. The forest, the mountains.

Then it struck him: “I have to share this, I have to share this with the world.” A number of coincidences have led him here. Now he knows why. A Belgian-Moroccan data engineer in a village not far from Norway’s geographic center, gets a Eureka experience from a glass of water … “It was a simple idea, but we worked hard,” he says, standing outside the new 1100 square meter facility. 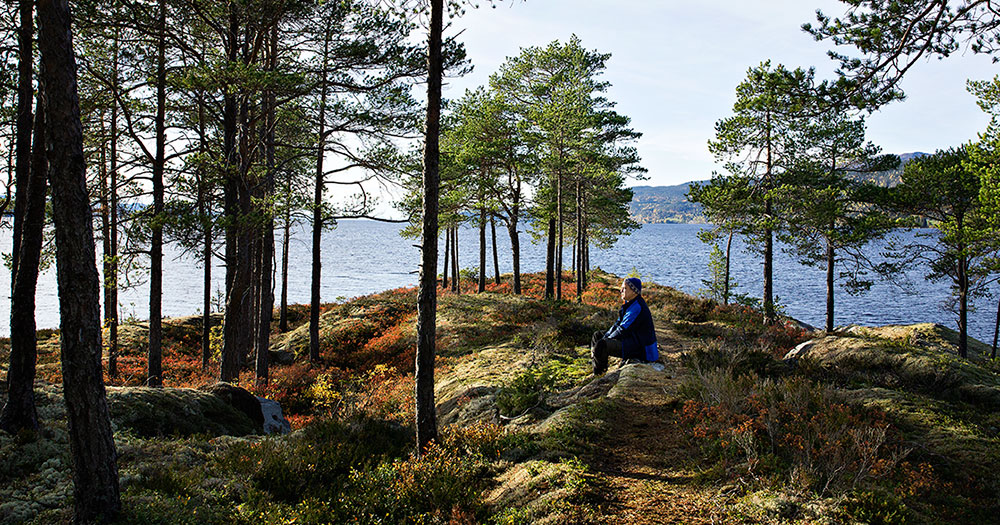 The founder Mohamed Sambou started the water project in 2008. The search for a suitable water source took eighteen months. Then followed two years of testing before the source was approved by the Norwegian Food Safety Agency in 2013.
“It took us three years just to find the perfect source. Then followed a few months of testing. We looked for a source where the water has low mineral content, neutral pH value, and not least: tastes good. At the same time, it had to supply enough water to meet the market demand. In addition to all this, the source could not be too far away, and the production not lead to major interferences in nature. I do not want to build roads and cut down forest on a large scale, just to extract something that gives life to the same nature. The water had to be tested according to strict requirements, and the taste had to be correct, balanced. We searched throughout the municipality. In the end, after exploration, countless test drills, we found a source that met all these requirements. As fate would have it the perfect source was right here, at Korsvollan, just a short distance from the center of Snåsa.” 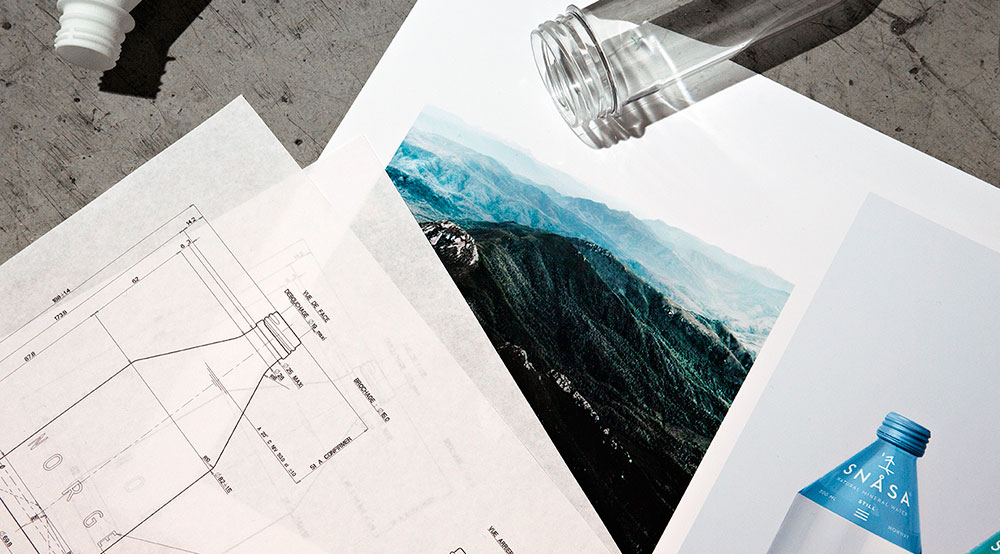 The bottle shape is geometric and pure, new in the category but timeless and archetypical. Brand design, bottle and package design by OlssønBarbieri.
Not far away from the plant, just 400 meters, in a clearance in the woods, behind a homemade wooden barrier, at the end of a modest gravel road, there is a small and very humble gray wooden building. A simple gray strip after an airplane over the blue sky is all reminiscent of modern civilization. One could imagine an old twisted lady opening the door with a creak, peeking out of the dark, as in the fairytales. But it is this little house that hides the well.

This was where the first drop was picked up from the depths. Under this cabin lies the Snåsa water source. “I’ve built it myself,” Mohamed says, almost apologetic. “We will soon set up a larger modern building over the well. It may not look so impressive, but here we can actually drain enough water to supply the international market.” A squirrel flits up the trunk of a pinewood. In the mountains, a few kilometers away, the Sami collects their reindeer for marking and slaughter. In the silence of the woods we can hear the sound of a river, where the trout is splashing. 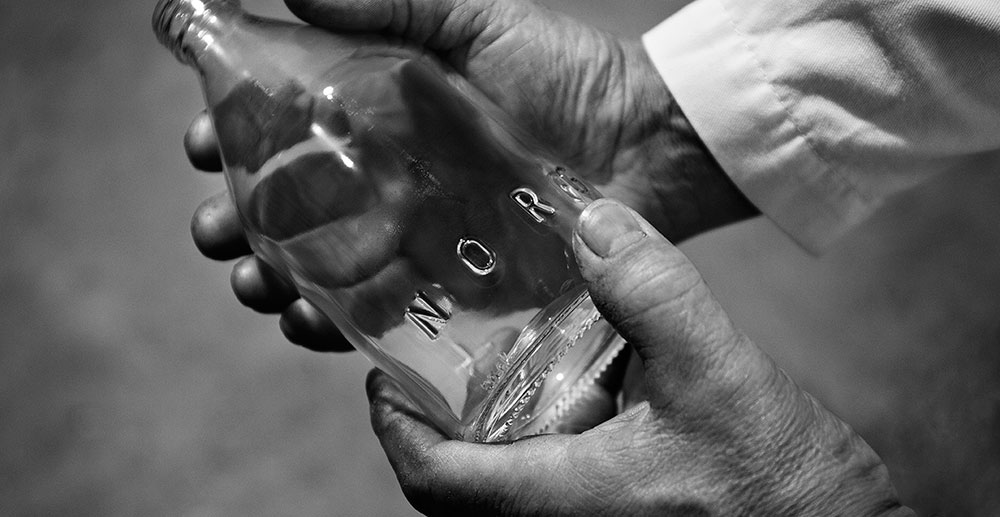 A glass bottle that will contain the most humble and fundamental of all drinks – crystal clear and tasty water of the best quality!
“Although we have cold winters and hot summers here in Snåsa, the source keeps a constant temperature of 3.5 degrees year-round. The water has a pH of 6.7 and a unique low mineral content. The Snåsa water source can provide millions of gallons of water annually, without compromising the natural cycle of the area.” He knows what he is talking about, Mohamed. Over the past years, he has become an expert on water. Countless small test wells have been drilled, countless drops tested in the laboratory. Countless meetings with hydro geologists, local politicians, investors and bureaucrats, to convince the skeptics of what Mohamed has always felt certain; that Snåsa has something unique to offer: its own clean water.

“If there is one thing I’ve done right in this project, it’s to surround myself with good people, I’ve employed knowledgeable, hard-working people. And there is more to come. The human capital has been there right from the start. I believe in our product. And I have faith in the employees.” About half of the Snåsa municipality is now a national park. Blåfjella-Skjækerfjella National Park is Norway’s fourth largest park. Inside the forest, in this lush landscape where 17 different species of orchids grow in the summer, the water source is situated deep below the protective forest floor. 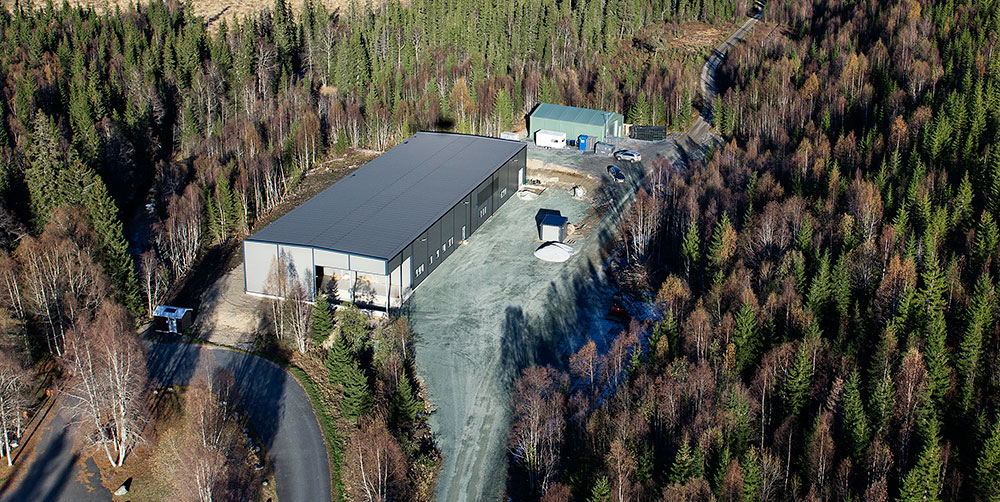 The new and modern full-scale plant was completed in January 2017. Situated in a secluded forest area with the underground natural water source 400 meters further into the forest.
The water slowly seeps through the many layers of soil, clay, stone and gravel. “There is no hocus pocus about our product,” Mohamed says and smiles, “it’s simply Norwegian spring water, filtered by nature itself. A natural product in its purest form, from the depths of the deep forest.” He shades his eyes from the low harvest sun with one hand, it glitters in the rhymed branches of an old yellow birch. “There is our guiding tree that we used in the beginning to find our way back to the source before we built the gravel road,” says Mohamed, pointing to the birch.“I do not have the heart to chop it down.” The slender, bearded tree stretches against the light above the narrow well house, like a retired compass needle.

“I gave away all the timber we took out to make the road, lay pipes and build the plant. And my plan is to plant as many trees as we chopped down.” Mohamed walks around the well house, and picks up a forgotten screwdriver from the ground, then leans carefully towards the guiding tree. “It’s strange that the water is by nature a kind of nomad, don’t you think, like myself, either it flows along the valley sides of the Moroccan mountains where I was born, drifting slowly through the canals in Belgium where I went swimming as a child, or dripping from the pine needles here in the pine forest around us. It is because of this constantly roaming water that I’ve finally chosen to stay here on Snåsa.” 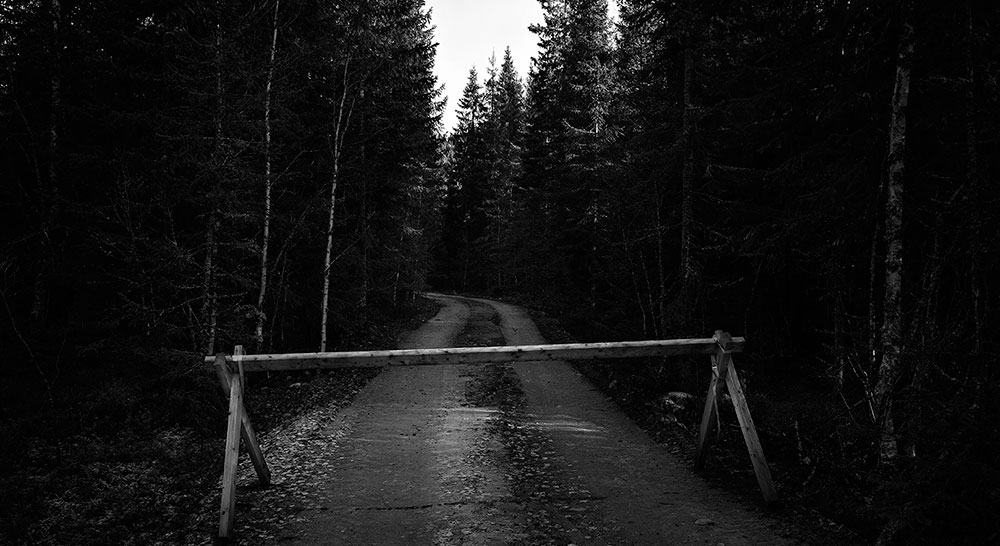 The Snåsa water source is situated safely underground in a secluded pristine forest area located on the outskirts of Snåsa.