From a lightning in the dense green forest, the sound of metal against metal. A tall man in his fifties is throbbing a thin, meter-long iron pipe into the moist surface. At the tip of the pipe there is a cutting edge. When only a few centimeters rise from the ground, he connects a new pipe to the end. 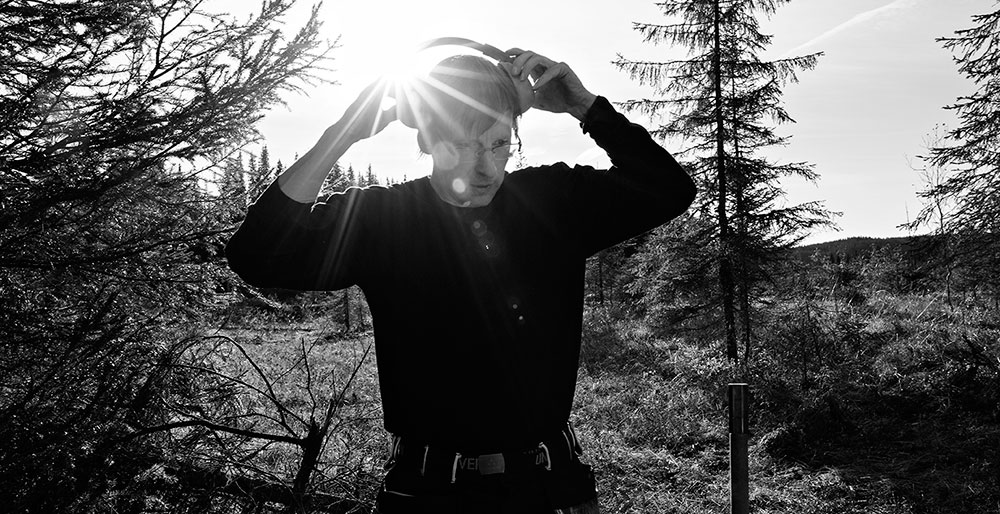 The hydro geologist Bernt Olav Hilmo has collaborated with the founder of Snåsavann AS since 2009 in search of the perfect source. He is still testing the rich soil around the Snåsa water source.
Hydro geologist Bernt Olav Hilmo lifts a heavy machine, the size of a small outboard motor, over the iron pipe, securing it to the end. He starts it by pulling hard into a string. Soon a thin engine noise sounds through the forest. The vibrating machine dives the pipe down into the ground. After a meter, he lifts it off, secures a new pipe to the end, puts the machine back over the pipe and drills further. “Now we’re down to seven meters, here’s gravel,” he says. “You can hear it if I twist the pipe, the gravel gnashes against the metal.

The groundwater begins at about three meters deep. To find the right water, the purest, which is virtually free of minerals, and holds a neutral pH value, you need to go further down. Iron and manganese, for example, we do not want. It is not dangerous, but it will give the water a certain taste. If you drill deeper, the water has traveled farther through the masses, filtered through the sediments, it’s cleaner.“ After about half an hour he has drilled seventeen meters down in the ground. In the top of a tree, a hacker’s hammer takes over the drilling. 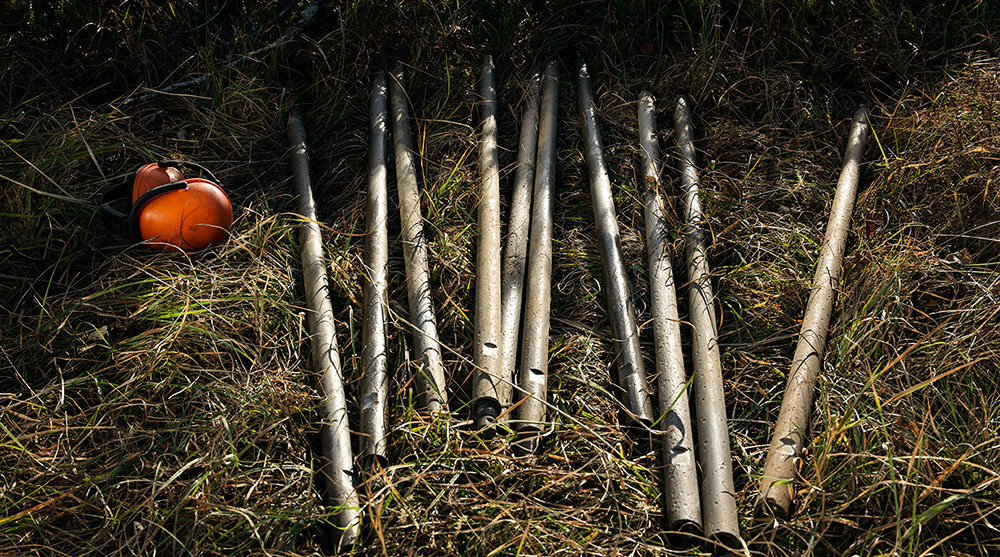 There have been systematic drilling and testing of several sources in Snåsa municipality, until the perfect water source with best quality water was found in 2009.
“I have been working with water for almost 30 years,” says Hilmo. He dries sweat off his forehead. “After such a long time, you get a feel of what kind of rock and sand you are drilling through. You first see the map of the ground, what we get from the ground penetrating radar (GPR), but as the years go by you learn to read the ground, the composition. It’s the time it takes to drill, the sound when you turn on a new pipe, the resistance in it. Soon I will jack the pipes up again. Then I will hear the sound, feel it in my fists; here it’s gravel, here it’s soil, here it’s rocks, here it’s sand, etc.”

The hydro geologist picks up an orange jack and attaches the end of the pipe. Leaning against the rod, he pushes it down with all his upper body strength, then pulls it up again. He repeats. No machines to help, just clean muscle power. “One of many positive things about the Snåsa water source is how untouched the nature around it is,” he says, “how little pollution. If you go in that direction.” He points to a mood. “You can walk for days without meeting people or settlements. The same goes for that direction. This means that there is minimal possibility that the water will come into contact with contamination. 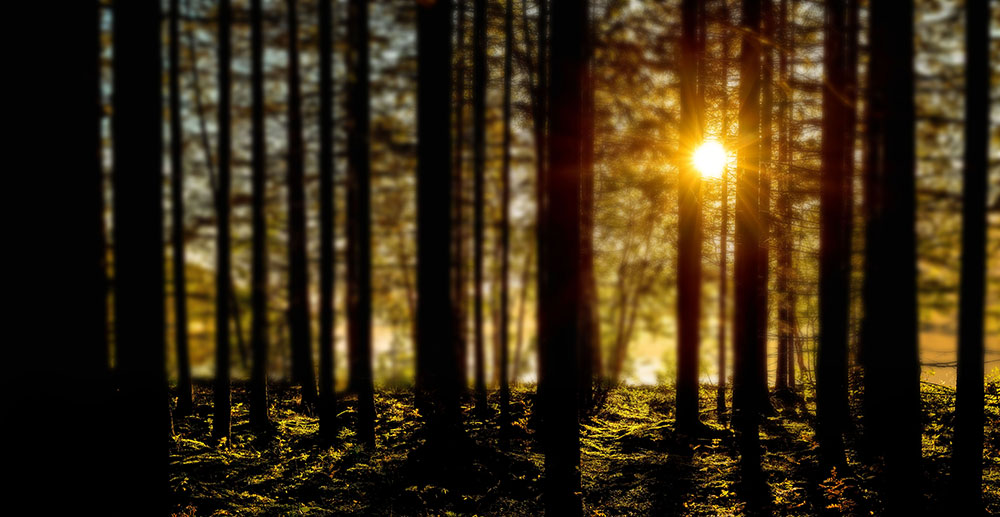 The Snåsa Source is safely placed under the soil in secluded forrest by Korsvollan, a mile from the center of Snåsa.
At the same time, it is not far to E6, Norway’s main transport route, which means that it takes minimal action in nature to extract the water and transport it. Here, there’s no need to build long roads into the woods or cut out unspoiled mountains. We only drill far enough into the soil, so the water flows up. The pipeline between the source and the tapestry is only 400 meters. It’s as good as nothing compared to many other water producers.” He continues to work. One after one the pipes comes out of the ground. Frosty breath comes from his mouth, steam from the upper body. Birds chirping and the sound of metal drawn to the surface through gravel and rock.

Soon the last pipe is back at the surface, the one with the sharp tip, it rolls into place among the other pipes, reddish-brown in the grass and the damp heather. They are subtly blinking in the autumn sun. Soon a rubber hose is brought down into the ground, a pump is turned on, and water, the cleanest water springs to the sky. A slight rainbow is detected in the water jet. Hilmo leans forward, taking a sip. Wipes the cheek with the coarse fist. Shuts the thirst after a hard work session. 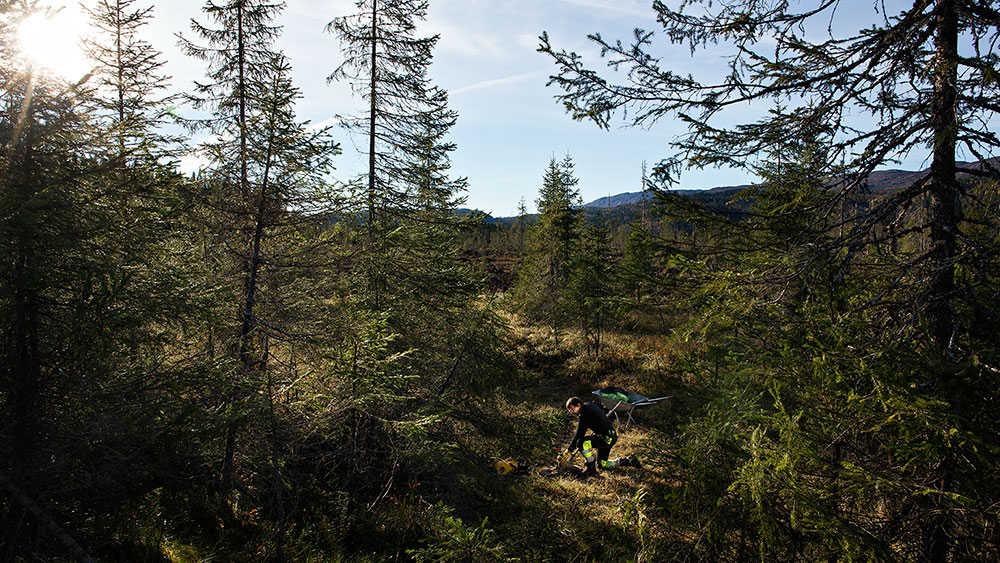 "One of the many positive things about the Snåsa source is how untouched the surrounding nature is." - Bernt Olav Hilmo, hydro geologist